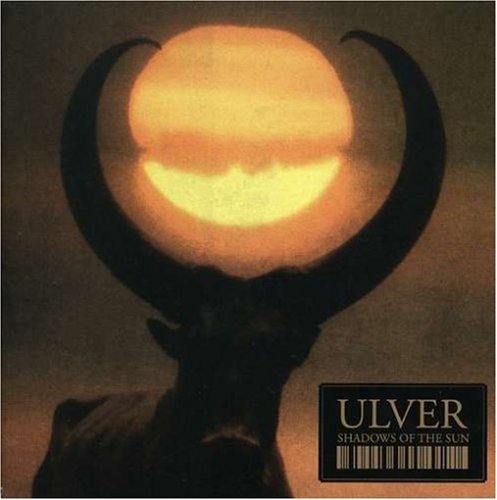 Great sorrow from the Norwegian legends ULVER. Music driven to despair, all sad and solitary, written and produced under the threat of extinction. SHADOWS OF THE SUN, is ULVER's 7th full-length album, the band's most personal record to date. Low-key, dark, and tragic. The album serves as the follow-up to 2004's 'Blood Inside,' the critically-acclaimed album that showcased the band's vibrant musical progression masterfully scripted amongst their unique vision, style and sound.

Ulver is easily one of the most progressive bands of all time...creative and inventive (not to mention unpredictable -- AVERSIONONLINE.COM

passionately beautiful...totally different from both what ULVER have done before and from what has been done in the musical world in general. -- METAL INVADER

"Dark and tragic" might be fitting adjectives for Ulver's 14-year career, but "low-key" is definitely a more recent development. For even though it might be hard to believe it when you listen to the soft-spoken new album, Ulver were once a seminal black metal band. They even have the name (Ulver translates as "Wolves") and a trilogy of folklore-inspired metal to prove it.

"p" "p"But even in a scene that sent shockwaves around the world, Ulver were outsiders. While other black metallers were "slaves to the one with horns", Ulver were inspired by Thomas Kingo, a 17th century composer of psalms. "p" "p"As the band matured, their influences became even more eclectic. Techno auteurs Autechre rubbed shoulders with visionary mystic William Blake. Ulver have released acoustic folk albums and instrumental techno records, raw metal and industrial soundscapes, and they have composed music for films. "p" "p"I'd like to say that they are equally comfortable with whatever medium they choose, but that would be a lie. Ulver never seem comfortable - they seem restless, longing for some far-off horizon or hidden world only they can see. This makes every new release from Ulver interesting because you not only have to ask "is it good?" (with Ulver, that's a redundant question) but "what kind of music is it?"

So, what kind of music is this? The boys already told you it's "dark and tragic", but while being weighed down with the world, they have managed to produce their most accessible album to date. This might sound like a paradox, but Ulver thrive on such paradoxes. Their fears have been given a shapely form indeed, capable, perhaps, of bringing a little comfort to some.

"p" "p"Soothing electronics and natural percussion provide the basis for Garm's warm vocals, singing songs of loss and disillusion. While the lyrics provide little hope, the music carries a note of quiet faith. It sees Ulver abandon many of their grand concepts, to focus on music and human emotion. Contributions by world-renowned thereminist Pamelia Kurstin help make SH ADOWS OF THE SUN a piece of rare beauty.

You want comparisons? SH ADOWS OF THE SUN sees Ulver borrow some pigments from David Sylvian's palette, using it to transport their own visions onto the canvas. Incidentally, Austrian audio abstracter Christian Fennesz, an associate of Sylvian, also help make this album what it is.

"p" "p"Other comparisons could be made. The band are avowed fans of Coil. Nick Cave, maybe. But such comparisons only cheapen, because Ulver really don't sound like anybody you already know. They are the perfect strangers.

Free delivery on all orders over £50
Trustpilot

Drizzle, splash & stir in the flavour

Add an explosion of flavour to your food with our unique collections of olive oils and balsamic vinegars.

Improve the good, enhance the great and savour even the simplest of meals with our family made olive oils and balsamic vinegars.
Discover new levels of food enjoyment.
A taste for anyone. A taste for anytime.

Traditional or infused, savoury or sweet, our superb range of balsamic vinegars deliver a taste experience like no others.

The Gift of Oil brings your food to life in the simplest of ways.
Love Food. Love Flavour.

Incredible on their own and even better together. Our oils and balsamics perfectly compliment each other! Lemon oil with Mango & Passionfruit balsamic. Basil oil with Sundried Tomato balsamic. Lime & Chilli oil with Garlic & Ginger balsamic…Use together to take food enjoyment to mouth-watering new heights!

Fancy building your very own Gift of Oil collection and making BIG SAVINGS too? Take a look at our fantastic bundle offers to find out how..... the more bottles you order the bigger the savings to be made!

Drizzle, splash or stir our exceptional oils and balsamics into all sorts of dishes to make everyday food taste great and good food taste fabulous!
Fall in love with flavour.
Find out how it all started right here.

Drizzle over, splash on or stir through our exceptional olive oils and balsamic vinegars, discovering new levels of food enjoyment. Fall in love with flavour with The Gift of Oil.

Our little book
of inspiration

Download our little book of inspiration.
It's jam packed full of ideas to take your everyday meals to another level!
Enjoy amazingly tasty food every day!

Richer, thicker and more intense than our Classic balsamic, our Reserve adds a splash of sophistication to any dish.
Superb over sea bass, salmon, blue cheeses and brie, field mushrooms or thick juicy steaks!

Mellow, fruity, low in acidity and absolutely ideal for everyday use.
Perfectly balanced, well rounded and simply delicious!
When mixed with our Sicilian oil makes an unbelievably gorgeous GO TO salad dressing!

Our most popular infused balsamic is wonderful on it's own over feta, goats cheese, Greek yoghurt, strawberries or ice cream.
Totally delicious too when mixed with one of our citrus oils as a salad dressing or as a yummy dip with fresh bread!

Fresh, green and grassy, our best selling oil is like "Summer in a bottle!"
Simply drizzle it over anything - meats, fish, seafood, vegetables, salads, soups....you can't go wrong!

Lovingly made by cold pressing freshly picked lemons together with selected Cerasuola olives and then gently infusing the oil created with the zest of additional fresh lemons.
Delicious over fish, chicken, prawns, crab and crushed new potatoes!

Take a look at our extensive library of recipes for simple, mouth-watering examples of how to use our olive oils and balsamic vinegars

Come along to our exhibitions at food festivals across the the UK. Sample products, ask the experts and let us show you how to easily transform your dishes.

*UPDATE* Unfortunately, due to the current Covid – 19 pandemic, all our events in 2020 have had to be cancelled.
We were hopeful that some of our Christmas shows and markets would still be allowed to go ahead but sadly this has not transpired.
We really do miss doing them and meeting our wonderful customers, some of whom we have serviced this way for 20 years now!
Let’s hope things get back more to normal next year and in the meantime not to worry, you can still order all of our products online as per usual!
HURRAH!

What people are saying

Trustpilot
Do NOT follow this link or you will be banned from the site!