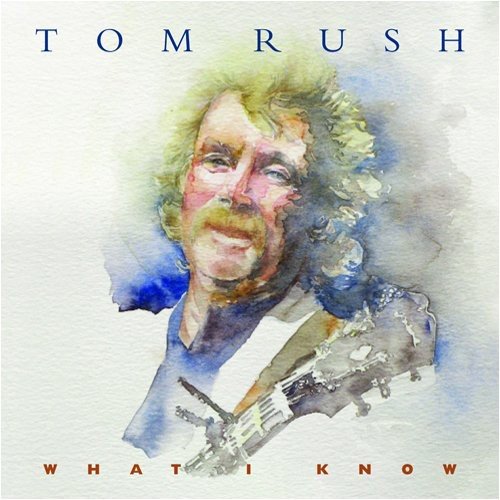 WHAT I KNOW is the first new studio recording in 35 years from Tom Rush, one of the great artists of the Folk Revival. His recordings on Elektra and Columbia are legendary and available again in reissued form. Tom, one of the great song finders and interpreters, first introduced US to writers like Joni Mitchell and Jackson Browne, and he continues to draw sizable audiences at his performances. This new album features special harmonies from well known friends Emmylou Harris, Bonnie Bramlett and Nanci Griffith. Surefire Media will be working the project to the media and Songlines will be working it to Americana radio.

". . . A warm, crisp gem of an album . . . it features harmonies by Emmylou Harris, Nanci Griffith and Bonnie Bramlett and a band of stellar players such as Fats Kaplin, Robin Batteau and Mike Henderson. . . . Rush has a reputation as a great song-finder. . . . On his new album, Rush includes fine songs by Richard Dean, Steve Bruton, Melanie Dyer and Kim Beard Day among others, but the friskiest and most quietly plaintive songs come from Rush's own pen." -- "i"Daniel Gewertz, Boston Herald, January 26, 2009 "br""br"". . . a deceptively informal, warm and engaging collection of acoustic songs from a variety of sources, Rush's steady pulse at the center of every one. His solo acoustic `Drift Away,' which ends the set, is a stunning surprise." -- Joel Selvin, San Francisco Chronicle

"His vocal style remains the same -- good-natured, friendly, and intimate, with a tinge of weary wistfulness. Thankfully, the production, like Rush himself, is low-key and, though grounded in folk and country music, has full and varied instrumentation. While there are celebrity cameos in the shape of guest harmony vocals by Emmylou Harris, Nanci Griffith, and Bonnie Bramlett on a track apiece, those are sympathetic complementary contributions, not parts roped in to grab attention." -- Richie Unterberger, AllMusic.com

"Legendary at finding just the right songs to capture a time (he is, after all, noted for recording songs by then unknowns such as Joni Mitchell, James Taylor, and Jackson Browne as well as Guy Clark and Bruce Cockburn) Rush unveils five originals, including the high steppin' `Hot Tonight' and the sly `One Good Man' and puts them alongside Eliza Gilkyson's seductive `Fall into the Night' and Steve Bruton's poignant `Too Many Memories,' which features a duet with Emmylou Harris. Melanie Dyer amp; Kim Beard Day's melancholic, yet somewhat humorous `What An Old Lover Knows' just wouldn't sound the same if sung by anyone else. Rush . . . sticks to the tried and true, to country-folk-singer/songwriter mode, but that's really not the point. The point is an old friend returns, scarred but not broken, in good humor and grand voice." -- Mike Jurkovich, Folk and Acoustic Music Exchange

"Rush is less about expounding universal truths than celebrating the individual moments that make life worth living . . . His lyrics are comfortably conversational, much like his lived in tenor, both of which are applied masterfully." -- Randy Lewis, Los Angeles Times

"Rush still has that deep, relaxed voice that gives listeners the impression they're old friends listening in on a musical conversation. (4 stars)." -- Mike Regenstreif, Montreal Gazette

"With his typical low-key approach, Rush has made a wonderful new album, featuring a number of fine new Rush originals, as well as songs penned by the likes of Jack Tempchin, Stephen Bruton, Eliza Gilkyson and Bill Miller. And he caps off the album with a beautiful, understated rendition of the old Dobie Grey hit, `Drift Away,' accompanied only by his acoustic guitar and a cello." -- Greg Haymes, Albany Times Union, January 29, 2009

Tom Rush was a leader in the Sixties/Seventies progression from performing traditional folk and blues to coupling folk and electricity into folk-rock, then to singing original compositions and outstanding songs by temporarily obscure young singer-songwriters. He formed his own record label before it was fashionable, and has been steadily touring for much of the last 40+ years. And we owe it all to testosterone: "I was inspired to start performing by the desire to meet girls," says Tom.

Originally a fan of late-Fifties rockers Elvis Presley, Chuck Berry and Little Richard, New Hampshire native Tom heard a recording by the great folk-blues singer Josh White on a family trip through Wyoming, a transformative experience. "I knew I had to become just like him. Then came the Kingston Trio, but I didn't like the shirts; then Odetta . . . Basically I picked up a little from just about everyone I listened to. Eric von Schmidt was a major influence once I got to Cambridge," where Tom had enrolled, and eventually graduated, as an English Lit major.

"p" "p"Rush became an integral part of the Boston/Cambridge folk scene of the very early Sixties, recording his first album, "b""i"Live at the Unicorn, in 1962 on a tiny label that almost immediately folded. He played the coffeehouse circuit in the Boston area, becoming a regular at the seminal Club 47, and recorded two albums of folk-blues standards for the Prestige label in 1963. After commuting to New York's Greenwich Village to perform, Rush moved there around 1966, after the release of his self-titled 1965 album for Elektra. In 1966, Elektra issued Tom's Take a Little Walk with Me, with its influential mixture of mostly traditional folk-blues songs on one-side and an electric band featuring Dylan sidemen Al Kooper, Bruce Langhorne and Harvey Brooks that rocked up songs like Bo Diddley's "Who Do You Love," Chuck Berry's "Too Much Monkey Business," and Tom's first recorded original, "On the Road Again."

Tom's next album for Elektra was a turning point for him and for the entire contemporary music scene. "b""i"The Circle Game (1968) showcased the "b"first recorded versions of three songs by then-unknown "b"Joni Mitchell, two songs each by the equally unsung rookies "b"Jackson Browne and "b"James Taylor, and what remains Rush's signature song to this day, the grave, brave, regret-filled "No Regrets."

Moving from Elektra to Columbia, Rush continued his pattern of recording distinctive vocals and personalized, definitive arrangements of original and "discovered" songs, expanding his pallet into country-rock in some instances. In 1970, Tom and his backing band joined the rock 'n' roll circus known as the Festival Express, a brief concert tour-by-train through Canada that included the Grateful Dead, Janis Joplin, Buddy Guy, Delaney amp; Bonnie amp; Friends and Eric Andersen, among others.

By 1974, after the release of his Ladies Love Outlaws album, Rush decided to drop out of the touring/recording cycle for a while - after catching his breath, he soon resumed touring, but his only recordings for the next ten years were a pair of live albums recorded at Boston's Symphony Hall on his own Night Light Recordings (while Columbia and Elektra issued various "best-of" collections). These concerts, first staged in 1981, were so successful that they became annual holiday events - "b" "the Club 47 series" - in which Rush invited old and new musical friends to join him on stage, mixing established stars such as "b"Bonnie Raitt, Emmylou Harris, Joan Baez and "b"Richie Havens helping to introduce newcomers "b"Nanci Griffith, Alison Krauss, Shawn Colvin, and "b"Mark O'Connor, among others, to wider audiences. Some of the concerts were broadcast by NPR and PBS. Rush took the show on the road, selling out Carnegie Hall, Washington's Smithsonian Institute and Kennedy Center, and many other prestigious venues. Tom still tours the country regularly with his own solo shows, and a live clip of him on YouTube performing the hilarious "Remember Song" has drawn more than 3.5 million plays, so he's reaching a wider audience than ever.

"p" "p"Relocating to New Hampshire in 2008 after stints in California and Wyoming, recording "b""i"What I Know, his first studio album in 35 years, keeping the musical torch burning with his generous folk spirit, what Tom Rush knows is how to write, choose and sing a song, how to make an audience believe every word he sings, and how to make everywhere feel like home. "p"

Survival and causes of death in 2,033 patients with non-transfusion-dependent β-thalassemia

This open-label, single-arm study investigated the long-term efficacy of tafasitamab plus lenalidomide in 81 patients with relapsed/refractory diffuse large B-cell lymphoma. The response rate was 57.5%, including complete responses in 40.0% of patients, and the median duration of response was 43.9 months. This treatment is a valuable option for patients not eligible for autologous stem-cell transplantation.

Grey zone lymphoma is a B-cell lymphoma, unclassifiable, with features intermediate between those of large B-cell lymphoma and classic Hodgkin lymphoma. The in-depth study of the two adolescent patients described in this case report expands the clinicopathological and genomic spectrum of this rare pediatric disease. Moreover, it provides information on their response to treatment.

The clinical picture of 56 patients with congenital amegakaryocytic thrombocytopenia due to MPL mutations was much more varied than previously thought. Twenty-five per cent of them had no signs of thrombocytopenia at birth, and 50% had non-hematologic defects. Pancytopenia developed in (nearly) all patients and hematopoietic stem-cell transplantation was effective in 87% of cases.

Sickle red blood cells exhibit abnormal adhesion to laminin mediated by Lu/BCAM protein at their surface. This study provides evidence of the involvement of oxidative stress in post-translational modifications of Lu/BCAM which impact the protein’s distribution and cis-interaction with glycophorin C at the cell surface activating its adhesive function in dense sickle red cells. The authors speculate that antioxidant drugs might attenuate this phenomenon.

Submit your manuscript without worries: we are flexible at first submission, all formats accepted.

Browse the Atlas for free